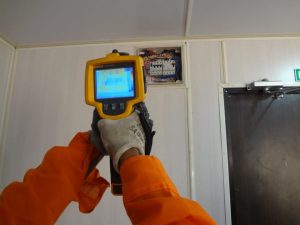 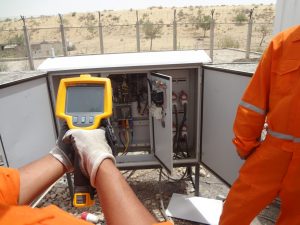 Infrared (IR) technology allows non-contact measurement of surface temperatures by analyzing the invisible, infrared spectrum emitted from an object. Spectrum brand 7.5μm to 14μm. Infrared thermography is an extremely useful diagnostic tool for equipment of all shapes and sizes.
Thermal imager technology is Focal Plane Array or FPA with thousand of pixels or individual infrared energy detectors arranged in two dimensional rectangles on top of the integrated circuit. That circuit capture the ‘infrared signal ‘and process data, displaying a two dimensional thermal picture on an LCD. Common array sizes include 160x 120, 320x 240.

Basic electrical power and resistance formulas explain therelationship between the power a unit uses and the heat it generates.

Example: A fused electrical connection has a resistance of 8 ohms and flow of 30 amps under normal circumstances. Infrared (IR) temperatures run at ambient room temperature (roughly 70 °F to 80 °F). As a bolted mechanical connection works loose over time, the overall circuit resistance increases slightly (measured in milli-ohms), but the amount of electrical current (measured in amps) squares itself and increases drastically. The resulting temperatures can run as high 500 °F. This massive increase in current flow is converted directly to heat through the physical condition of the metal, or worse yet, straight to an open air arc. Adding insult to injury as the generated heat increases resistance climbs eventually out of control. This phenomenon often referred to as ‘run-away thermal breakdown’ or an arc flash. Regardless of the voltage, the heat generated by a massive rush of current can easily exceed 30,000 °F.

Thermal imager is a part of Predictive maintenance program

When critical operating systems unexpectedly malfunction, it inevitably increases costs, requiring the reallocation of manpower, material, reduction in productivity; if not corrected threatens profitability. According to R Keith Mobley the author of “An introduction to Predictive Maintenance”, eliminating unscheduled or unnecessary repairs would allow manufactures, processors and generators to reduce the need for corrective maintenance by as much as 90 percent over 5 years. Mobley also says that a successful predictive maintenance (PdM) program reduces the lifecycle cost and extends the useful life of critical systems by up to 60 percent, as well as increases manpower
utilization by as much as 85 percent.

Since “HEAT” is often an early symptom of damage or malfunction, it’s a key performances value monitored in predictive maintenance (PdM) programs, Using Infrared imaging (Thermography) and other inspection technologies to monitor heat as part of a PdM program can help mitigate the impact of, or even prevent, failure prone electrical systems from going off line. Keeping production lines up and running maximizes efficiencies which lead to increased productivity. Increasing the bottom line of your business!

Application:-
Infrared imaging can identify problems in a variety of plant systems and equipment, including electrical substations, transmissions, circuit breaker panels, motors, bearings detect dysfunctional Pumps and under performing surface heat exchangers and IR technology can be used to conduct thousands of different types of measurements, including:

To undertake theromgraphic analysis and power quality analysis at least once in a year to avoid any kind of downtime or breakdowns.

How we undertake the tests:

1. We will carry out thermogrpahic and power quality analysis on a live system on any working day with a minimum of 50% load on the system.
2. We will undertake a detail power quality analysis on power distribution system using state of the art equipment.
3. We will be taking pictures of all electrical terminals and motors with state of the art thermographic camera.
4. We will be submitting you a detail report highlighting problematic areas and suggesting the kind of action required.